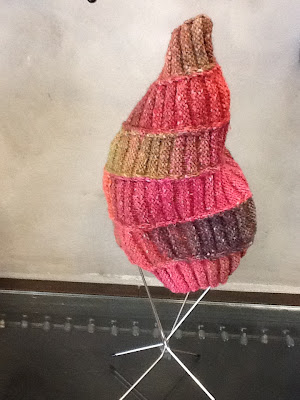 I'm not quite sure how to date the amount of time I've known Eiko Berkowitz; how long I've known of her is easier to pinpoint. The first time I ever spotted Eiko was a few months before I got married in 1998. I was having my dress made by the amazing Mary Adams, at her shop on Ludlow Street. There was a little cutout square in the wall of her shop, so that she could chat throughout the day with her friend and next-door-shop-owner-neighbor Amy Downs, a hat maker. Maybe I saw Eiko through that square; maybe I was browsing Amy's store in between fittings, and saw Eiko full-on and up-close. The only detail I'm certain of is that Eiko was wearing a hat. A tall, whimsical, colorful hat, probably one of Amy's. 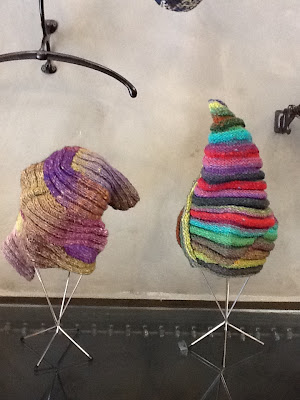 This was also the case the next time I saw Eiko, at Rita Bobry's East Village outpost Downtown Yarns, where, as coincidence would have it, I was buying yarn to make a hat for a friend. She was wearing a hat when I was more officially introduced to her by my friend Elanor Lynn, when I was writing my first book about knitting, Knitting Lessons. And she was most assuredly wearing a hat when I visited her in her own shop, Yu, which specialized in vintage Japanese clothing, as well as skirts and embroidery of Eiko's own design. 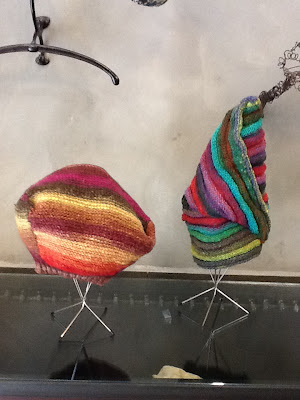 It's probably clear by now that the unifying theme here is hats – Eiko wearing hats. But these days, the Okinawa native also makes hats, some of which I present to you in today's post. And it is probably clear from these photos that the unifying theme of Eiko's hats is the unexpectedness of their structure: they seem to twist and tilt in the most unlikely directions. Hopefully later this week, I'll be able to supplement these pictures with some words from Eiko herself: stay tuned! 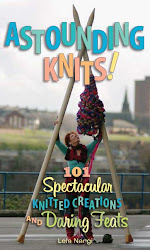